Heretics is an alternative storyline within Bloodlines, the story containing Hunter and Darius. In this version of the story, Hunter has renounced his powers as the Reaper. Lost in grief, he wanders a world that he no longer has a part in; Darius remains by his side, his last friend and ally.

> for more background info on these characters, see their individual pages at the left <

Hunter - the Heretic, the Fallen Reaper

Shattered by the loss of two of his closest friends, Hunter has given up his power and retreated into grief. He's largely reviled by the world he once stood as guardian to; seen as cursed and unclean in the sight of the gods, there's no place willing to take in the Heretic.

For the most part, Hunter's largely unaware of the world around him and lives in a state of immensely deep depression. He often forgets to eat or sleep unless reminded, and seems numb to cold or pain. Something's broken inside of him, whether from the death of his friends or the stripping of his power; he's a shadow of who he used to be, and only Darius seems to be able to bring out what little remains of his former self.

Though the death of their friends hurt him too, Darius has known enough loss in his life to survive it in a way Hunter couldn't. Since then he's stayed by the fallen Reaper's side, guarding and guiding him through a world turned increasingly hostile. For Darius, Hunter is all that matters. He'll never turn his back on his oldest and truest friend, and is willing to take on the world for his sake.

He's changed for the sake of the role he has to play now; less harsh and less proud than he used to be. Hunter has always brought out the best in him, and now his life is a slow struggle to bring back the friend he's stayed loyal to throughout everything.
Interaction:
The relationship between Hunter and Darius is a protective and mutually dependent one. Their friendship has endured the meltdown of the rest of their lives, and it matters more to them than anything else.
Romance has slowly developed between them by the time the Heretics storyline begins, but it is definitely secondary to their friendship and isn't something that's usually a huge focus of their day-to-day life (but I like drawing mankisses so have at it if you're down for drawing that). For the most part it's a very quiet, gentle thing; anything more heated between them has a hint of desperation to it and is initiated by Hunter, not Darius. Darius is well aware of how fragile his friend is mentally, and won't push anything because any sort of consent Hunter could give is dubious at best.

>>> IMPORTANT: Shenanigans need to stop at the waist. Hunter's instability means actual sex between these two is not going to happen for reasons of unclear consent.

Additional Notes:
- except in rare circumstances, Hunter's eyes are human black and his blood is red again
- though the rest of his scars aren't set in stone, Hunter ALWAYS has the long scars from the loss of his wings and a couple of nicks on his face 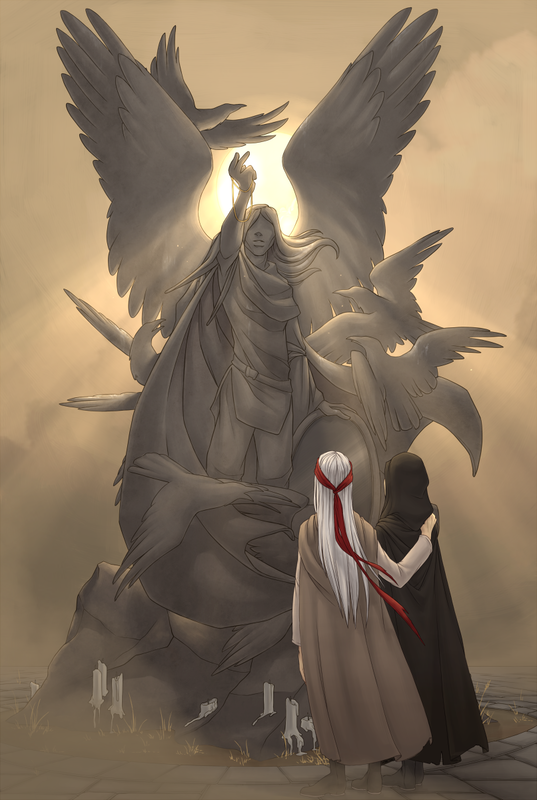 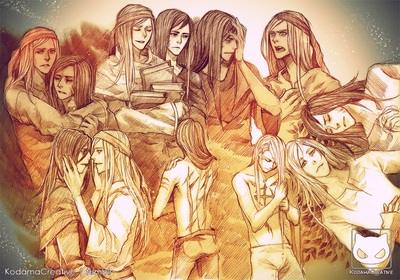 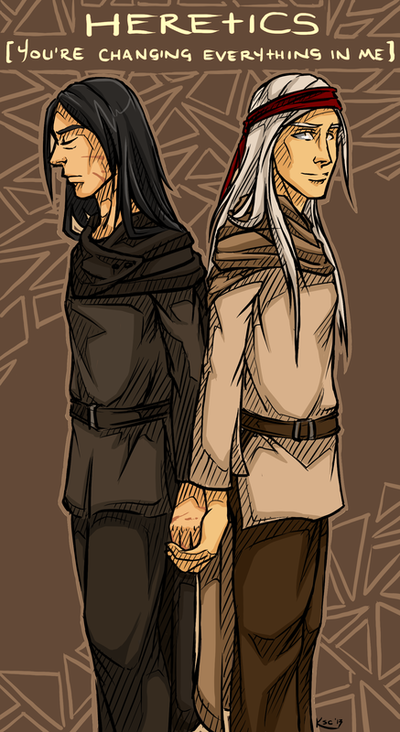 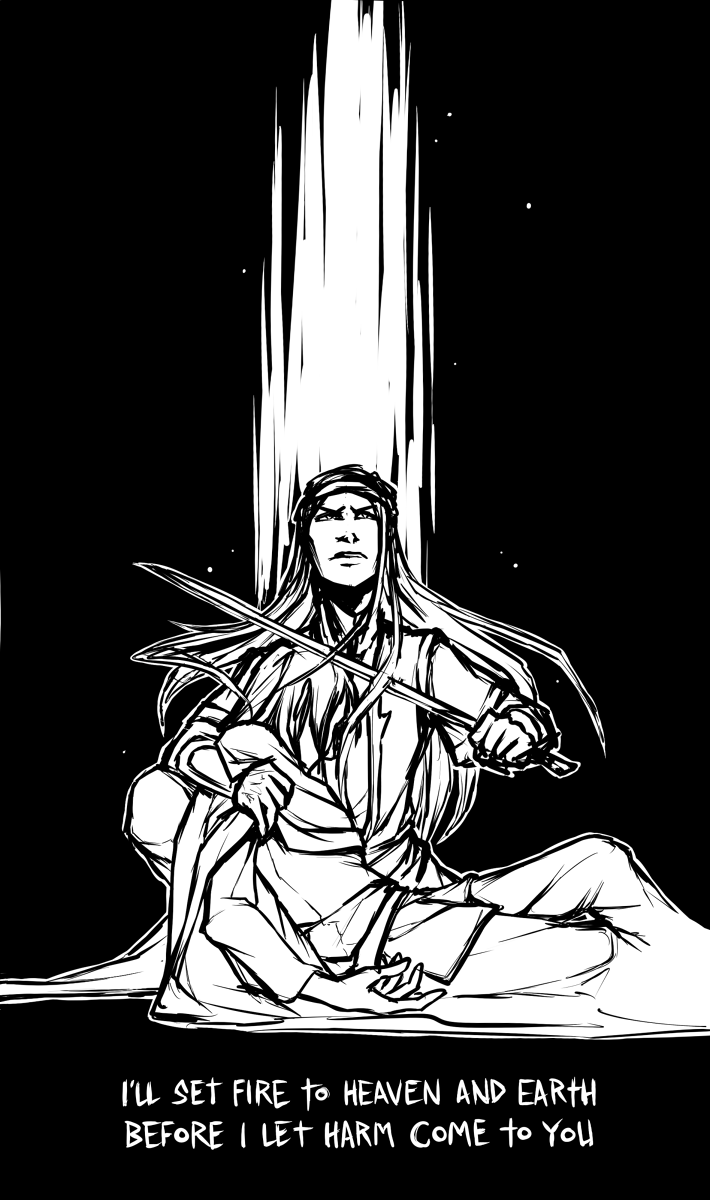 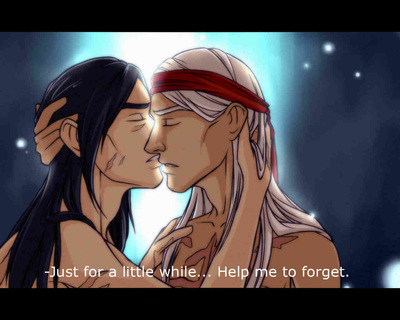 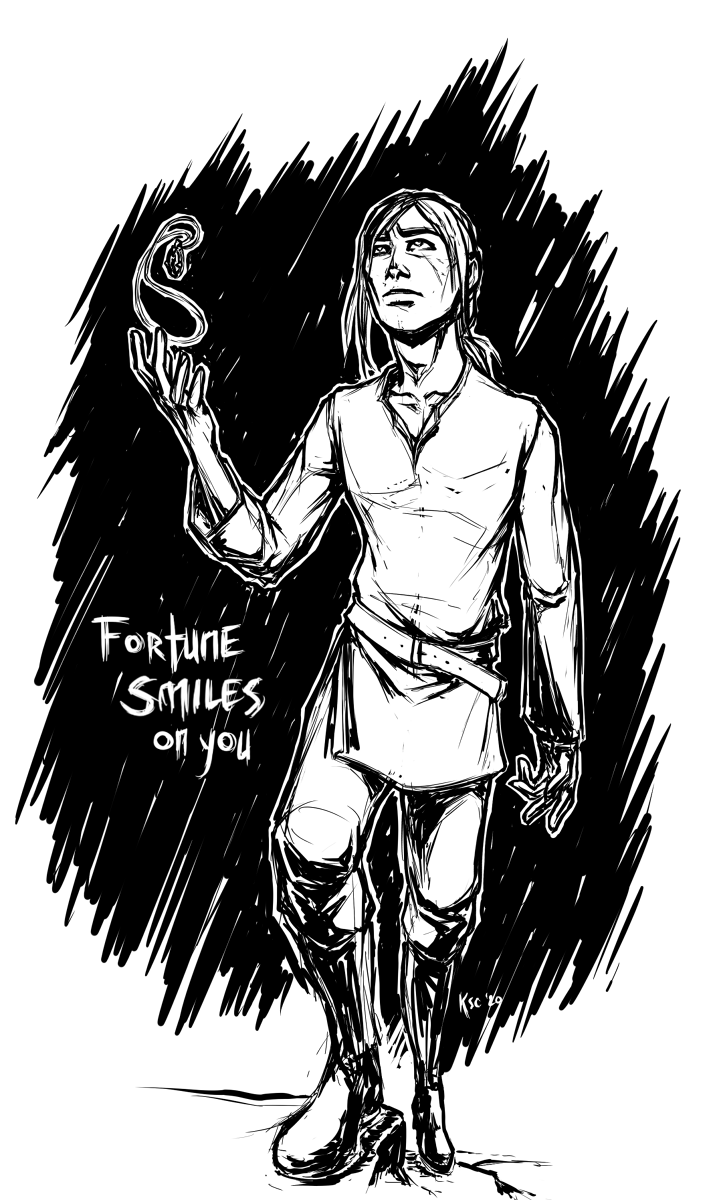 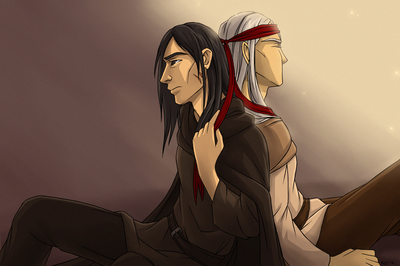 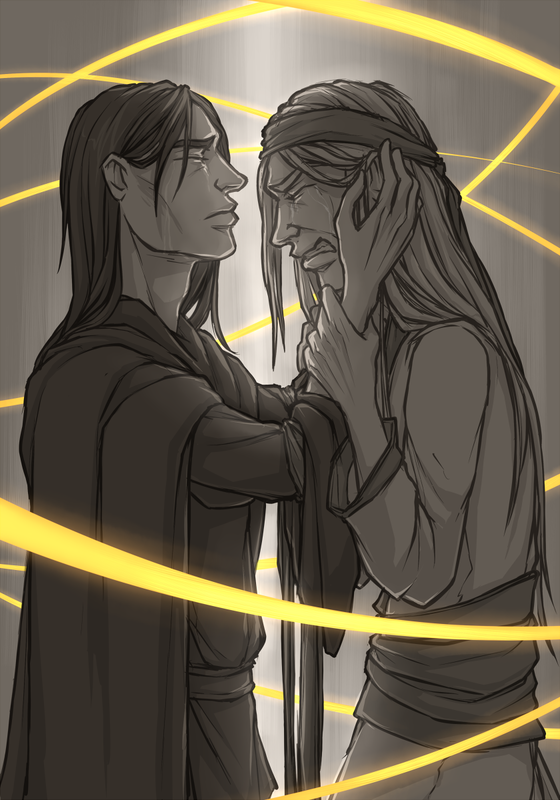 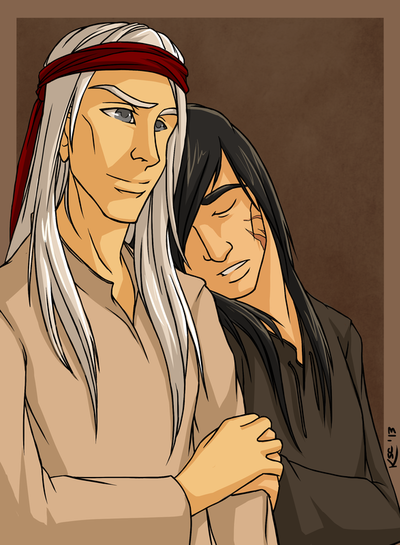 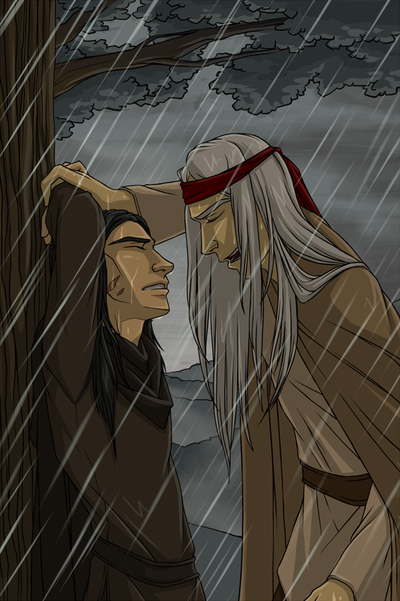 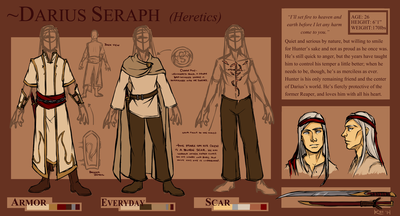 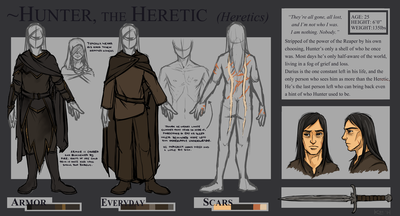 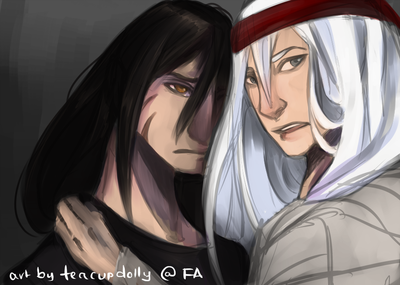 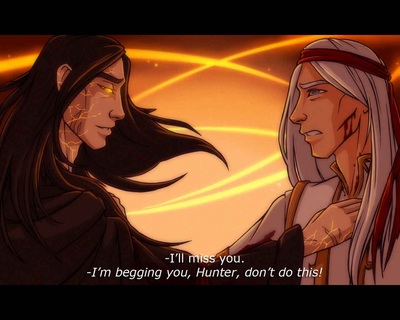 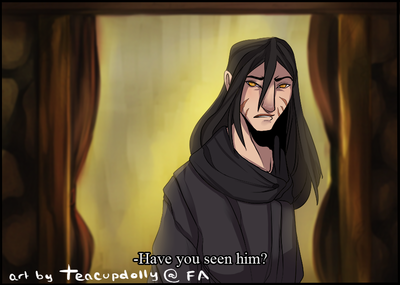 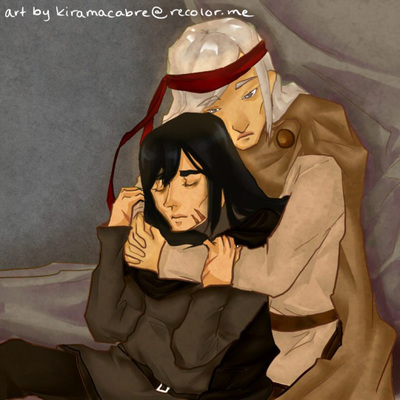 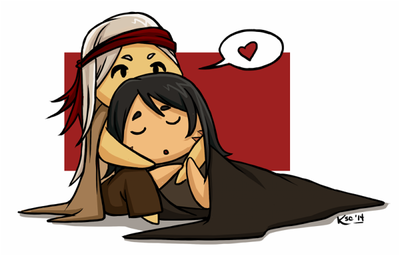 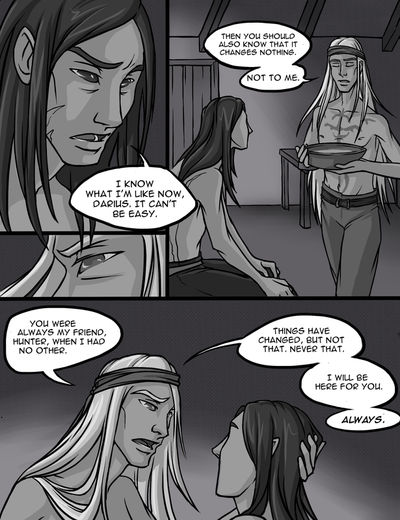 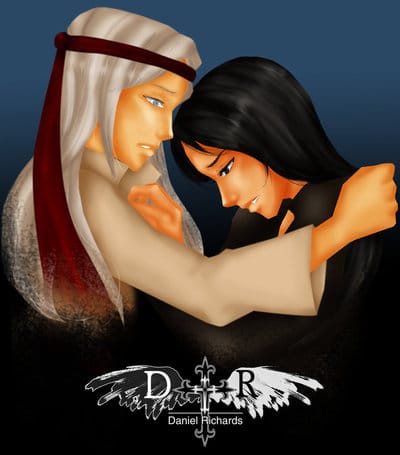 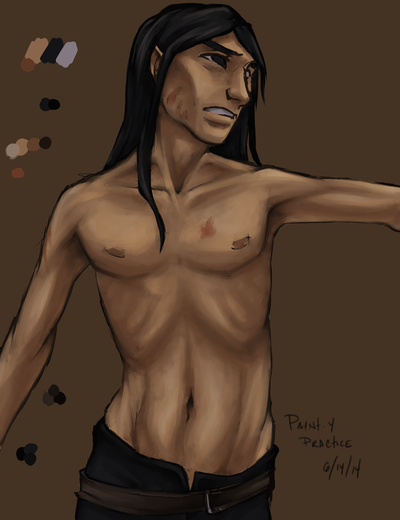 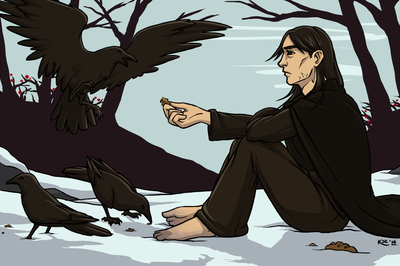 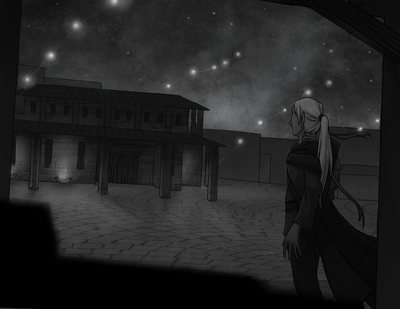 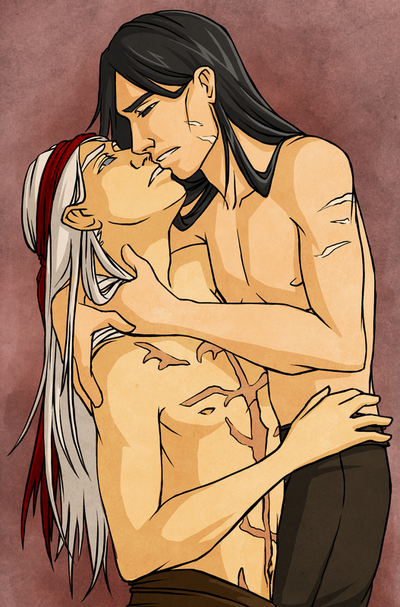 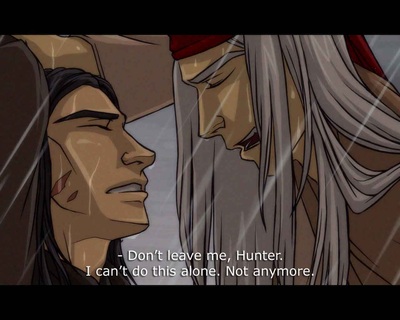